Reconstructs selected curves or surfaces to a specified degree specified and number of control points.

Sets the degree for the new curves or surface. You can create curves of degree 1 through 11.

Sets the number of points in the u- an v-directions
.

Sets the degree for the new surface. You can create surfaces of degree 1 through 11.

Trims the rebuilt surface with the original trimming curves.

Samples the original surface at knots and halfway between the knots. It then pulls the sample points to the rebuilt surface and calculates the deviation.

The display color indicates how far away the new surface is from the original. Points are green if the surface is within absolute tolerance, yellow if it is between tolerance and 10 times tolerance, and red if it is farther away than that.

The lines are 10 times longer than the measured deviation in the direction of the deviation.

A master curve dictates the structure of all of the output curves. This is useful when matching a set of curves to one for lofting, sweeping, etc.

Allows interactive modification of the curves to more closely match the original by spacing the control points non-uniformly.

The maximum deviation from the original curves is reported at the command line and marked with a point on the curve.

Specifies the maximum number of control points per curve used to rebuild.

Displays two more controls along each curve to influence how the RebuildCrvNonUniform command distributes control points. The controls at the end of the curves can be used to shorten the resulting curves.

Resets the editing points to their original locations.

Restores original 3-D surface edges that have been forced away from the surface through editing.

To see what it does:

Changes a curve or surface so it is knot-vector uniform.

Guarantees that every control point affects the surface exactly the same way, no matter how much the surface is edited.

You can set the degree
of the curve up to 11.

When drawing a high-degree curve, the output curve will not be the degree you request unless there is at least one more control point than the degree.

Replaces each curve segment that has the geometry of a line or an arc with a true line or arc. The command also combines consecutive co-linear and co-circular segments.

Removes large curvature variations in a curve while limiting the geometry changes to the specified tolerance. 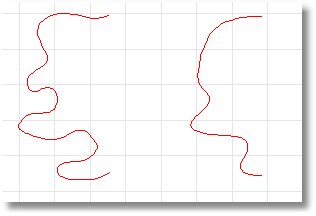 Averages the positions of curve and surface control points and mesh vertices in a specified region.

The Smooth command evens out the spacing of selected control points in small increments. This command is useful for removing unwanted detail, and for removing loops in curves and surfaces.

On mesh objects use the Weld
command  before smoothing in order to prevent the mesh from pulling apart.

To smooth part of a curve or surface

Smooths only in the specified x-, y-, or z-direction.

Use world
or construction plane
coordinates to determine the direction.

The curve control point toward the average.

The curve control point moves past the average.

The curve control point moves away from the average (roughing).

Trims the new fit surface with the original trimming curves.

Sets the degree
of the surface in the u -or v-direction
.

Changes the structure of a curve to polyline or arc segments.

Converts the curve to arc segments. Sections of curves that are nearly straight are converted to straight-line segments.

Converts the curve to polyline segments.

Note: The simplification step is done using the absolute and angle tolerance, not the custom tolerance settings set in the command.

Sometimes simplifying can be too aggressive, converting normal NURBS curves into arcs or lines, especially if the curves are very small in relation to the absolute tolerance. In that case turning off simplifying may give a better and more accurate answer.

The maximum allowed deviation from the curve direction at the arc segment endpoints.

Set AngleTolerance to zero to turn off the mechanism that keeps the arc segments tangent to each other and close to being tangent to the input curve. The output will have kinks, but since it consists of arc segments, there will be fewer segments than if the Lines option was used. This is useful for approximating a curve with the smallest number of segments.

Recalculates an object’s parameter space to be roughly the same size as its 3-D geometry.

You generally do not need to care much about surface parameterization, including the domain, unless you apply textures. Then you may need to change the domain so as to make the texture apply correctly to the surface.

Reports the u- and v-coordinates of a selected location on a surface.

If Yes, creates a point object on the surface.

Note: When you pick a polysurface
, Rhino calculates the result for the component surface at the location you pick. If the surface is trimmed, Rhino uses the untrimmed surface.

Creates point objects by entering surface u- and v-coordinates.

If Yes, creates a point object on the surface.

Note: When you select a polysurface
, Rhino calculates the result for the component surface at the select location. If the surface is trimmed, Rhino will use an untrimmed surface.

Evaluates and reports the domain of a curve or surface.