Creates a 3-D cage object to be used to deform other objects. 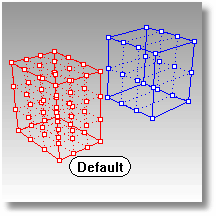 The Cage command creates a box-shaped object. The resulting cage object has control points
in three directions. Cage objects can attach geometry in order to deform that geometry with the CageEdit
command.

This is useful for fine tuning shapes. Cages can be set up to modify complex objects with a small number of control points. This ensures that transitions are smoother than could be achieved using standard control point editing.

After creating the cage object, use the CageEdit
command to “capture” an object with the cage and use the cage’s control points
to deform the captive objects.

Uses the objects’ bounding box to make the cage.

Once the box shape is defined, define the number of control points
and degree
of the cage in each of three directions.

Number of control points in the x, y- and z-directions

Degree in the x, y, and z-directions.

These can be arranged as a one, two, or three directions depending upon the control object chosen (curve
, surface, or cage
). The CageEdit command is a general purpose tool for any deformation.

It is difficult to deform complex objects with any control. Cage editing allows smooth deformation of surfaces with dense control points
as well as polysurfaces. Cages can have simple control point structures allowing more global, rather than local deformation of objects. Polysurfaces are not broken apart at the seams by CageEdit deformation.

CageEdit allows both overall global deformation and more local deformation of part of an object. Deformation is accomplished by moving the control points of a control object. The control object can be a cage object made with the Cage
command or an existing surface or curve. Box, plane and line control objects can be created within the command itself, but preexisting objects can be used for more flexibility in setting the initial shape. In addition, the volume of space to be deformed can be limited to spheres, cylinders, and box volumes that you can define. These limiting volumes are separate from the cage or control objects themselves and can be used to limit the deformation to a part of the captive objects rather then the entire objects. There is a definable falloff distance between the deformed volume and the rest of the objects when these volumes are used.

History is built in regardless of the History
setting, since the command makes no sense without the ability to update the caged objects.

Note: The steps for creating the bounding box are the same as for the Cage
command.

Define a line to be used as a control object.

Specify the parameters for the line.

The number of control points
.

Define a plane to be used as a control object.

Note: The steps for creating the rectangle are the same as for the Rectangle
command.

Degree in the u- and v-directions
.

Number of control points
in the u- and v-directions.

Define a box to be used as a control object.

Note: The steps for creating the box are the same as for the Cage
command.

Accurate is slower to update and may result in denser surfaces when deformed objects are refit.

Creates surfaces that have fewer control points and are therefore less accurate.

Objects are deformed throughout 3-D space. The influence of the control object on the captives is not limited to the region inside cage objects or adjacent to control curves or surfaces. Objects that are only partly contained in cage objects are still deformed throughout. The influence of control objects is greatly magnified the farther captives are outside them.

Define a box, sphere or cylinder that limits the influence of the control object over the captives in space. Specify a falloff distance. A large cage can be used to deform an object smaller than the cage.

Removes selected objects from the influence of a control object set up by the CageEdit
command.