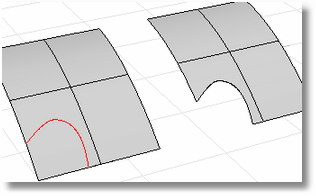 Deletes selected portions of an object inside or outside where they are intersected with another object.

When line objects are used as cutting objects, imaginary extensions of the line are used.

This makes it unnecessary to manually extend lines that do not intersect the objects to trim.

This option does not apply to surfaces.

A trimmed surface has two parts: a surface that underlies everything that defines the geometric shape, and trimming curves that either trim away the outside portion of the surface or cut holes in its interior.

Only the underlying surface defines the actual geometry of the shape. The trim curves do not define a surface — they only mark which part of the surface is to be considered trimmed away. 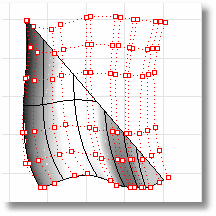 You can remove the trim curves and get back to the underlying surface using the Untrim
commands to remove holes or outside boundaries.

When you have a trimmed surface whose underlying surface is much larger than the outside trimming boundary, you can use the ShrinkTrimmedSrf
command to shrink the surface back so that it is only large enough to hold the trimming boundaries and doesn’t have a large extra unused area.

Trims a polysurface with a curve similar to cutting foam with a heated wire.

Constrains the direction for the wire curve extrusion to world x, y, or z.

Constrains the direction for the wire curve extrusion to the curve plane normal.

Constrains the direction for the wire curve extrusion to the construction plane z-direction.

Constrains the direction for the hole extrusion along a curve.

Constrains the direction for the second cut extrusion to world x, y, or z.

If Yes, keeps all parts of the solid.

Removes trims and surfaces joined at the trim curves from a surface.

The original trimming objects are separated and retained. 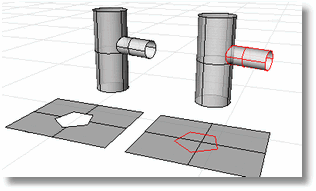 The trimming objects are deleted. This also deletes any geometry attached to the edges of the boundary. 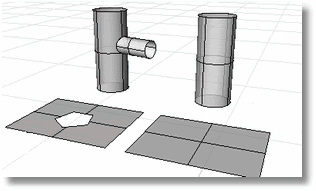 Removes all trimming curves if selecting an edge of a trimmed surface.  If a hole edge is selected, then all holes on the same face will be deleted.

If Yes, the original trimming objects are separated and retained.

Replace the edge with a line between the edge end points.

The edges must meet within surface boundary to give successful results.

Trims a curve by specifying two points on the curve.

Deletes selected portions of a mesh inside or outside where they are intersected with another object.