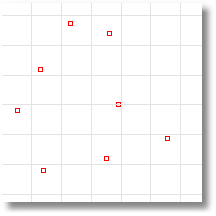 Draws a single point object at a specified location. 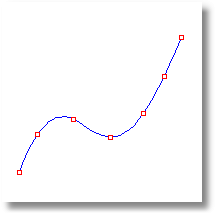 Creates point objects by dividing a curve into a number of equal length segments or segments of a specified length.

Creates point objects on a curve starting from the natural start of the curve. If you want points to start at the other end, use the Dir
command to flip the curve.

Places a point at the ends of the curve. 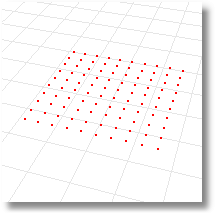 Draws a rectangular grid of point objects from specified corner locations, two adjacent corners and a distance, perpendicular to the construction plane, or from a center.

Note: Point grids are drawn with the same options as the Rectangle
command.

Creates a grid of point objects at the intersections of objects and points projected toward the construction plane in the current viewport. 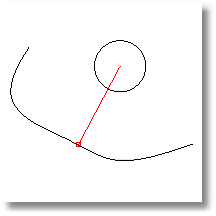 Creates a point object at the closest point from a specified location to a selected object or on two objects where they are closest to each other.

Point objects are created both of the selected objects at the points closest to each other. 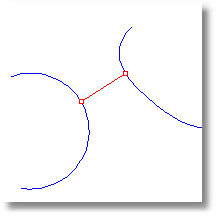 Note: To select parts of objects, use sub-object selection
.

If Yes, a line is drawn between the base point and the closest point on the object.

Places a point object at the end of a curve.

Places a point object at the start of a curve.

Creates a single object from selected point objects for selection and faster display.

You can use the point cloud object to group any number of individual points into a single object, minimizing the amount of storage in the 3DM file and maintaining performance. You can snap and select points in the cloud as if they were just point objects. A point cloud is similar to a mesh object that does not display any wires between vertices.

To free all points in a point cloud use the Explode
command.