A bitmap image that make a surface appear bumpy in a rendered image. Bumpmaps do not modify the shape of the surface. 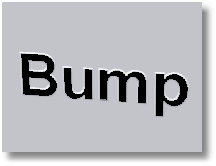 Coordinate input
, elevator mode
, object snaps
, and other cursor constraints
allow the cursor to move away from the construction plane. 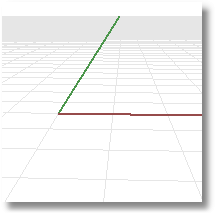 Continuity describes the relationship between curves and surfaces.

Each level of continuity assumes the conditions for the previous level are met.

Position measures location only. If the end points of each curve are in the same location in space, the curves are position continuous (G0) at the ends. 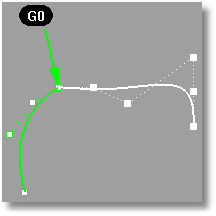 Tangency measures position and curve direction at the ends. The direction is determined by the first and second point on each curve. If these all fall on a line then two curves are tangent (G1) at the ends.

Curves and surfaces with G1 continuity are also G0 continuous. 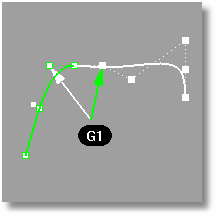 Curves and surfaces with G2 continuity are also G1 and therefore G0 continuous. 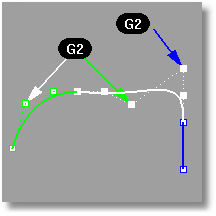 Control points are markers or “grips” on objects such as curves, surfaces, lights, and dimensions and cannot be separated from their objects.

Curves have control points
that determine the shape of the curve. 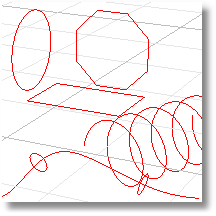 A parabola, hyperbola, arc, and circle (conic section curves) have degree 2. They have one “bend.”

A cubic Bézier has degree 3. If you arrange its control points in a zig-zag shape, you can get two “bends.”

For curves, the direction is determined originally by the start and end points specified when it was drawn.

For surfaces the normal is a direction that points toward what you can think of as “outside” or “up.” For closed polysurface (cone, cylinder, box, etc.) or single-surface solids (sphere, torus), the normal always points “out.” However, on an open surface or polysurface, the direction of the normal depends on how it was created and can seem arbitrary.

Every surface is roughly rectangular. Surfaces have three directions, u, v, and normal. You can display the u- and v-directions and the normal direction with the Dir
command.

These directions are used when mapping textures
and inserting knots
. 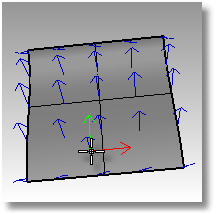 A circular surface can be like a spider web with one direction converging in the center. 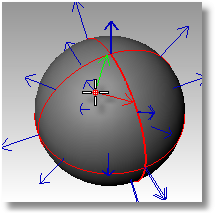 The domain is the set of all possible input values to the function that defines the curve or surface.

Points on a NURBS
curve evaluated at knot
averages.

For example, if the curve degree is three and the knot vector is:

the edit points are points on the curve evaluated at these parameter values:

The edge of a surface or mesh polygon. Surface edges can be either trimmed or untrimmed. If trimmed the underlying surface will generally extend past the edge.

An edge that is not the result of a trim curve on the surface. The ‘natural’ edge or outer bounds of a surface. The underlying surface will not extend past an untrimmed edge.

A surface or polysurface edge that is not connected to another edge. Solid objects have no naked edges. 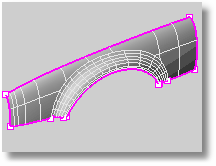 A technique that uses color to display non-chromatic properties of a surface. The CurvatureAnalysis
, DraftAngleAnalysis
, and ThicknessAnalysis
commands use false color analysis. 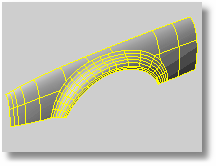 The red points mark the locations of kinks in the curves.

A value of the curve parameter where the polynomial definition of the b-spline changes. Non-uniform knot vectors allow any spacing of the knots, including multiple knots (adjacent knots with the same value).

Imagine a rope. If you hold it at the ends, the rope will sag according to the laws of nature (gravity, the stiffness of the rope, etc.) with a polynomial definition. If you tie it off somewhere along its length (by putting knots in it), there will be a different polynomial definition (sag) for each segment between the knots.

Knot points are points on curves where it is the most convenient to place end points of cross-section curves for surface creation commands like Sweep2
and NetworkSrf
. A large part of Rhino’s powerful proprietary surface geometry engine is devoted to calculating surfaces when cross-section curves are not at knot points. This lets the designer think about things like shape and form instead of worrying about math geek details like knot vectors. However, knot snap
is provided for those users who like to locate features at knots.

Degree number of knots at a location, which is as many as are possible. There may be a kink
at that point that is desired.

A collection of vertices and polygons that define the shape of an polyhedral object. Meshes in Rhino consist of triangles and quadrilaterals.

The location where the edges of the mesh faces meet. The mesh vertex (plural vertices) contains x-, y-, and z-coordinates and may contain a vector normal, a color value, and texture coordinates. 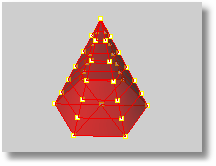 Rhino creates triangles and quadrilaterals meshes for export into various file formats. When surfaces are joined together in Rhino, the meshes along the joined edge have coincident vertices. If a mesh is generated from a solid, there will be no holes in the mesh. This is valuable for export to STL rapid prototyping files.

NURBS stands for non-uniform rational basis-spline. It is a mathematical way of defining curves, surfaces, and solids. For more information, see About NURBS
. There are also many sites on the Internet with explanations about NURBS curves and surfaces. Use your favorite search engine to find them.

A periodic curve is a smooth closed curve. Periodic curves stay smooth when you edit them.

Point objects mark a single point in 3 D space. Points are the simplest objects in Rhino. Points are most often used as placeholders. They are placed with point drawing commands
They can be located with the Point object snap
and manipulated with transform commands. Point objects are not the same as control points
.

A curve consisting of two or more curves joined together.

Polycurve with points at the connections.

A polysurface consists of two or more surfaces joined together. If the polysurface fully encloses a volume, it is also a solid. 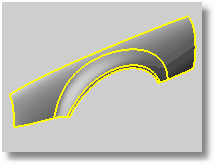 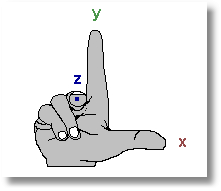 Any surface
or polysurface
that is closed and has no naked edges
defines a solid.

A NURBS surface is like a rectangular stretchy rubber sheet. The NURBS form can represent simple shapes, such as planes and cylinders, as well as free-form, sculptured surfaces. All NURBS surfaces have an inherently rectangular organization. 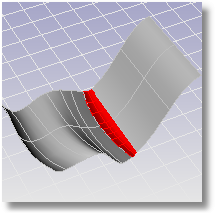 Rational surfaces include spheres, cylinder sides, cones. These surfaces are determined by their center and radius rather than a polynomial representation. 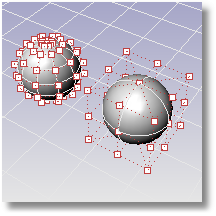 A trimmed surface has two parts: a surface that defines the geometric shape and trimming curves that mark sections of the underlying surface that are removed from view.

Trimmed surfaces are created with commands that trim or split surfaces with curves and other surfaces. Some commands create trimmed surfaces directly. Since it can be important for you to know if a surface is trimmed, the Properties
command lists the trimmed or untrimmed state of the surface. Some Rhino commands work only with untrimmed surfaces and some rendering software does not import trimmed NURBS surfaces. 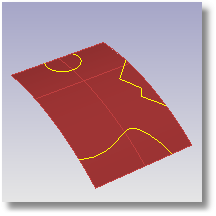 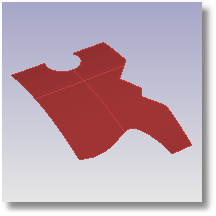 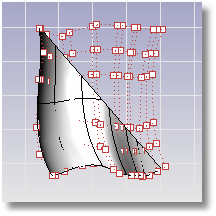 Every trimmed surface retains information about its underlying surface geometry. You can remove the trimming curve boundaries to make the surface untrimmed with the Untrim
command.

Surfaces and solids are represented as 3-D curves that look like wires wrapped around the surface. The wireframe consists of edge curves and isoparametric curves
. Use the WireframeViewport
command to view the object in wireframe mode. 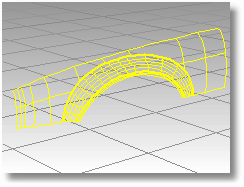 Rhino contains one world coordinate system
. The world coordinate system is independent of the construction plane
of the active viewport and cannot be changed.  The arrow icon in the lower left corner of each viewport displays the direction of the world x-, y-, and z-axes. The arrows move to show the orientation of the world axes when you rotate a view.